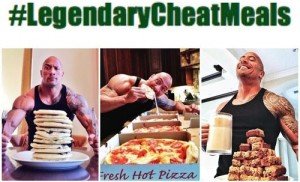 The other day, someone sent me a question regarding cheat day weight gain (a day with no dietary restrictions whatsoever – meant for mental and physical recovery from dieting stress).

And I figure I might as well share my answer here on the blog as well. So the question itself was:

if i go on a big cheat day (around 7k+ calories), will all the unused calories become fat gain or most of them is water weight? thanks

Okay, so first off, I’ll say that calories and water are two different things, so the calories can’t turn into water weight per se, but rather – the calories can be stored as glycogen, which can bind with water molecules to create the water weight gain effect. In addition – some food mass will remain in your digestive tract for a while and will also contribute to an increase in weight.

The specifics depend on how your diet has been going so far and what exactly your cheat day will contain. Usually, if you’ve been in a caloric deficit for several days at least and then have a big cheat day that contains a lot of carbs for example (which I recommend), those carbs will go towards refilling your glycogen stores (stored blood sugar) which will bind with water to create the water weight gain. Also, the increased food mass in your digestive system will also contribute to the weight gain. But the carbs themselves won’t really contribute much to fat gain at all.

The protein from your meals will also not really contribute to fat gain because it’s quite hard to make fat out of protein.

So that basically leaves your cheat day fat intake as the only thing that will actually contribute a little to overall fat gain. But realistically, the fat gain will be negligible. Maybe you’ll end up gaining something like an extra 100-200g of fat from the cheat day (you might gain 5 lb/2-3 kg of weight overall, but that is indeed mostly water and food mass weight). So as long as you keep a cool head and don’t get stressed out by the weight fluctuations, you’ll be good to go.

What little fat you gain during the cheat day, you’ll be able to lose in a day or two of regular dieting. Yet the benefit of the cheat day can last for a lot longer. Not only will you refill your glycogen stores for more overall energy, you’ll also help to normalize your hormone levels a little, and lower stress, because you won’t feel like the diet is restricting your food choices.

I remember that while I was dieting for my bodybuilding contest, I had been in a notable caloric deficit for a few weeks. And then, I ate ~6000kcal for 3 days in a row before stepping on the stage the leanest and biggest I’ve ever been. No joking – 3 days of 6000kcal a day and I actually looked and felt better.

So, a cheat day with 7000kcal shouldn’t be an issue at all. ASSUMING, you’ve been doing good work on your diet up to that point.

One recommendation that I do have for the cheat day, is to not go too nuts with buying foods in advance. It can feel really liberating to buy everything you desire and then go nuts with the cheat meals, but very often, what will happen, is that your stomach has gotten so used to the diet, that eating all the food you bought turns out to be very hard. So a bunch of food can end up as left-overs which will then start to tempt you on the following days – the days where you actually want to get back to the diet.

So I suggest making plans to perhaps not buy all the food at once, but rather – buy enough for one, nice cheat meal and then if you still want more – go and buy more.

← Training & Nutrition during Ramadan EMS training - what is it? And is it any good? →

I recently joined an online forum and found myself giving advice about sustainable, long term results when dieting. We were talking about intermittent fasting, but this advice really applies to everyone. Here's what I wrote:   The key to sustainable dieting...
Read More

I recently received an e-mail where an individual asked for advice on how to best go about working out during Ramadan. In this article I'll do my best to answer that question.   For those of you who aren't aware, Ramadan is a special month in the Islamic calendar...
Read More

The Health Benefits of a High Protein Diet

It's common for people to get completely lost in the supplement market these days. They often end up spending ridiculous sums to buy products that may very well end up doing nothing. For this reason I'm going to talk about a cheap natural substance today that has...
Read More